The Tony Gwynn Error card from the 1978 Topps set is perhaps the most coveted of all error cards ever produced. The first day that packs arrived in stores, Topps received hundreds of calls from angry mothers wondering why there was a naked lady on a baseball card!


The incriminations, reprints, and apologies soon followed. According to a Topps press release issued the next day, the photo was inserted into the production run by "a disgruntled former employee". Topps promised that the error would be corrected immediately and "tainted" cards would be pulled from the shelves.


An estimated 12,000 error cards were printed, of which only 2,500 were shipped to stores. Internal documents (released by the Topps corporation after the Forstmann Little & Company leveraged buyout in 1984) show that Topps managed to recover 2,492 of the cards. The offer for complete sets of 1978 baseball and football cards was too much for all but the most lickerish old men to refuse. 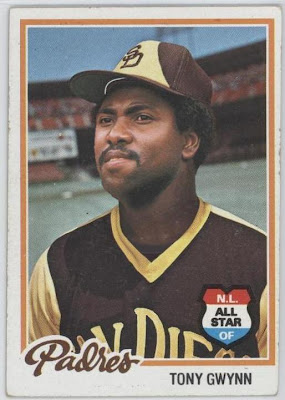 Back in '86, I sold my entire collection (minus the Padres) to obtain the error version at an estate sale in Rancho Santa Fe. Times sure have changed. Of the five known copies, only one has come up for auction since 1990. The sale price of $1.4 million (less buyer's premium) set a record for a single, ungraded card at Sotheby's in 1993. Several collectors of high end baseball cards have a bounty out for the card.

In 2004, I was offered a small island near Vanuatu for my copy of the card. It was tempting, but the humidity would have wreaked havoc on my collection.

What's that? You want to see the error card? Well, sorry. You'll have to pay, just like everyone else. The nationwide tour of Major League ballparks begins at the All-Star Game, July 19th in St. Louis. Tickets for the exhibition start at only $89. (Does not include admission to the game)

Posted by PunkRockPaint at 8:31 AM

you tease you. I got that out of a pack when I was thirteen and kept it under my mattress til I left home to join the Navy. My parents burned the card while I was in boot camp and I have forgotten what it looked like. Just a quick glimpse please.