We are proud to announce that PunkRockPaint has been announced as the winner of the first annual Thorzul Will Rule Halloween Contest: Nightmares on Cardboard!

I will admit, my entry was pretty cool. But it was not nearly as great as the amazing post written by the host. My cheeks hurt from laughing and smiling as I read.

Thank you, Thorzul Will Rule, for your amazing blog. I am so glad I could be a part of it.

Check in on Things Done to Cards this All Hallows Eve for my next post: The Making of a Monster.
Posted by PunkRockPaint at 3:09 PM 2 comments: 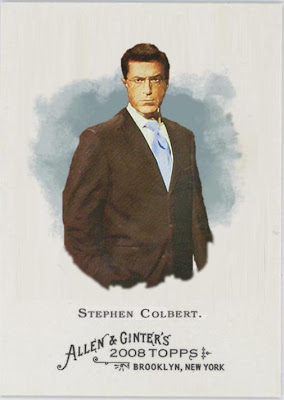 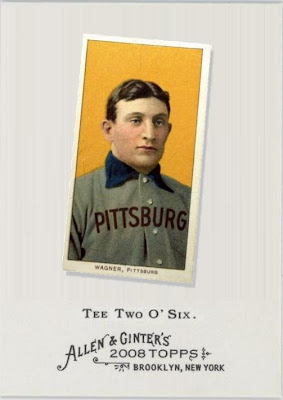 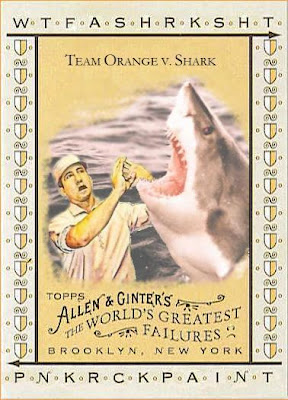 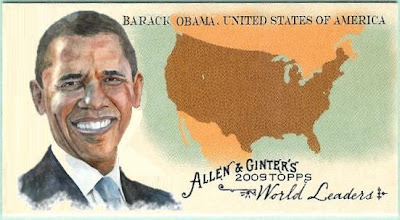 Posted by PunkRockPaint at 12:18 PM 8 comments:

A (not so) brief introduction...

For me, baseball was never about the game. Baseball was about collecting. I remember making baseball cards of my tee-ball team. Going to see the Padres was about what souvenirs I could get my hands on. Baseball cards were my favorite thing in the world... That was before I found out that they could be worth money!

In 1985, I got an entire box of cards as a gift. That first Dwight Gooden rookie card was the beginning of the end. A single pack of cards was not enough. I was a junkie. More, more, more!!! 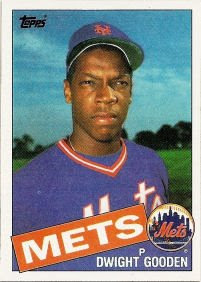 There were a couple of years in college that I didn’t buy any cards. (A love of music joined my love of cards.) Other than that, I have always bought cards whenever I had money. My love for baseball cards eventually became a love for the sport (and a huge man-crush on Tony Gwynn.)

Card money became season ticket money. My dad and I have split season tickets for the Padres since 1997. The concept was that we would alternate payments. He would pay for the seats the first season; I would pay for the next year. My parents are the greatest people in the world, and more often than not they would pay. Next year didn’t come very often.

My parents had both retired by the time the ’07 season rolled around. They planned to spend the summer traveling across the country in their motor home. It was a four-plus month trip from San Diego to Cooperstown and back. My dad and I had been talking about going to Tony Gwynn’s Hall of Fame induction since the mid ‘90s.

I had the season tickets all to myself, but I didn’t go to very many games. I started getting into the local music scene. My friend Isaac was hosting an open mic night; and I started going every week. (It was strictly as an observer. I have NO musical talent.) At first, it was just to get myself out of the house, but I was soon hooked on some of the amazing artists. With any open mic, there were people playing for the first time. But the one Isaac hosted brought in a lot of talented singer songwriters. Whether they were trying out a new song or simply publicizing an upcoming show, I was just happy to hear them.

Over the course of the baseball season, I made a bunch of new friends, and met the girl of my dreams. I didn’t get really into the Padres season until the last couple weeks of the season. Oh, the disappointment!

When the ’07 World Series ended, Matt Holliday had still not touched the plate against my Padres in game 163; I still had a sense of optimism regarding the ’08 Padres; I was still out of work, having been laid off at the end of August; and I still needed a baseball fix.

Since when did my childhood retirement plan become an embarrassment? 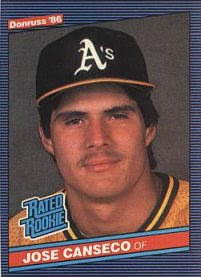 Dr. James Beckett had assured me that these boxes of cardboard in my closets would lead me to the life of luxury. Collecting cards in the ‘80s, I felt confident that I would be able to pay for my first car with a couple of Canseco rookies. How was I to know that there were millions upon millions of cards manufactured?

My addiction to baseball still needed feeding. It was too soon to watch all ten discs of Ken Burns’ Baseball. (I usually save that until January.) I was feeling especially creative. Lots of free time tends to produce creativity… and sleep. I have always loved drawing; and I have a reasonable proficiency in MS Paint. (Photoshop seems to me like a bit of a shortcut when creating art.)

All great artists mine their pain for artistic gold. I make no claims of being a great artist, but I certainly have closets full of cardboard pain. Why not make baseball cards of local artists? Hmmm… 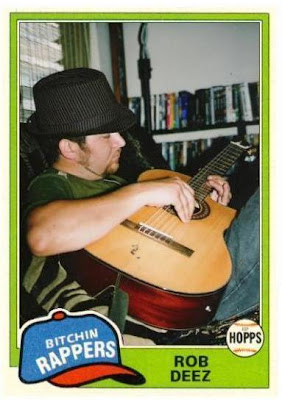 If you are not familiar with the work of Rob Deez, I would suggest checking out his myspace. Mr. Deez mainly writes songs about alcohol and women. While the subject matter may seem limiting, the fruitful mind of Rob Deez never fails to produce amazing lyrics.

His legendary live performances and acoustic hip-hop style have earned him several nicknames: “The C.E.O. of Flow”, “The Acoustic Rhyme Master of San Diego”, “Mr. Deezeriffic”, and “That Dude Just Stole My Beer” to name a few. In fact, Rob Deez is so good live that a bootleg recording of songs played at live shows won him the Album of the Year award at the 2007 H.A.T. Awards (San Diego’s Acoustic Music Awards.)

For the record, future posts will be less talkin’, more drawin’.
Posted by PunkRockPaint at 3:18 PM 2 comments:

I am not really sure what this blog is going to be. Will it be a gallery? a diary? an efficient time-waster? All of the above, I guess. I am going to try to post as often as possible.

I promise there will be plenty of pictures.

A rolling stone gathers no moss grows on the north side of a tree falls in the forest does it make a sound and fury signifying nothing to sneeze at. Yeah, nobody will get that.
Posted by PunkRockPaint at 12:11 PM 11 comments: