All Your Cards Are Belong To Us...

I recently realized that I had proposed a trade on the Thousand K Giveaway that would have got me in trouble. As much as I wanted the 1971 Nate Colbert, I couldn't part with card #414 Woodie Fryman. I had checked the Heartbreaking 1971 Need List, turns out Matt needed one of my '71s that I had revealed. Fryman was promised to Matt. I clicked on the Cancel Trade Offer tab, and after a message warning popped up. I followed with another click, certain that I didn't want to break Matt's heart (really didn't intend that pun). The following message popped up:

Ouch. Topps, I am a member in good standing in the Society for the Promotion Of Good Grammar (SPOGG). Since I am sure you read this blog, please correct this minor error... or I had stopping purchase your product.
Posted by PunkRockPaint at 8:36 AM 5 comments:

You Always Remember Your First...

Don't get me wrong, I am a big fan of Pops. I had the chance to meet him back when I was in high school. He was an amazing person. Not to mention that the '79 World Series is the first of which that I have any recollection. I don't remember any specifics, but I do remember the We Are Family song... Does that count?

Back to the Pops card I redeemed. I have never been a big fan of the Boyhood Photos of the Stars cards. I really dislike the new ones from this year's set. So I sent out a trade request on Saturday...

To my surprise, when I awoke this morning, I had a new card in my collection: 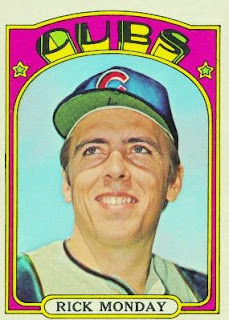 A true work of art! I can only imagine that Arthur got fired from the Topps art department after this catastrophe. Nonetheless, I am very happy with my new addition. Fitting that it came on Monday.
Posted by PunkRockPaint at 8:14 AM No comments: 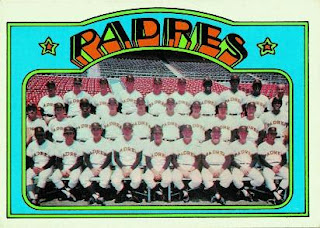 A cease fire has been declared! Peace is at hand! I made it through the Great Bip War of  2010 with nary an envelope delivered to my door.

Like a wannabe war profiteer, I hoped that this conflict would line my cardboard coffers with Padres cards. Unfortunately, no Bips came my way. No cloud is without a silver lining (excepting, of course the cumulonimbus - we all know that their linings are merely light gray.) With those Bips that I missed out on, I also managed to avoid stacks of what we now call "the lost generation".

It is with a heavy heart that I recall the spilled pulp of the junk wax. We shipped an entire generation of cardstock cannon fodder off to far away places, never to return (unless sufficient postage was not paid.)

Let us not forget the '89 Topps, the '90 Upper Deck, the '91 Donruss, the '92 Fleer, and many other cards from the junk wax era. They were once treasured members of our family, not to be discarded (pun intended, yet horrible.) 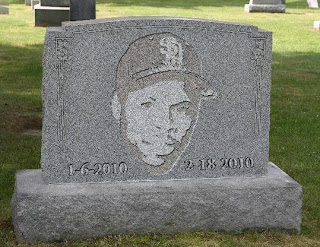 Posted by PunkRockPaint at 4:25 PM 3 comments:

I bought a blaster last night on my way home from work. After pulling one Million Card Giveaway redemption card, I logged on to the Topps site on my iPhone. Quite surprised that it was actually working, I was even more shocked when this appeared: 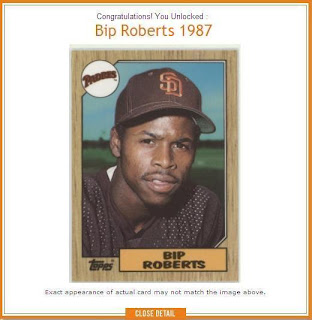 Clearly topping the epic, 210 Dave Gallagher bipping, I got Million Card Bipped... I have not (yet) been Bipped via the postal service, but Topps managed to get me.
Posted by PunkRockPaint at 12:15 PM 5 comments:

Am I the first to see this? If you watch the promo video for the Topps Million Card Giveaway, at the 42 second mark a "code" is revealed. That code is not some random bunch of numbers. Nope. Anyone familiar with my favorite TV show will recognize The Numbers: 4, 8, 15, 16, 23, 42. Don't believe me? Check it. 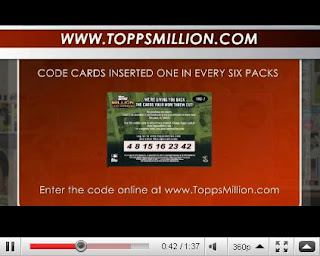 Thanks, Topps, for making my day! (Oh, thanks for the 1972 Steve Renko In Action, too! Awesomeness!) 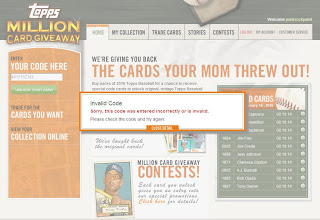 When I first saw the Topps Million Card Giveaway cards in my annual box of Topps cards, I actually liked the look of them. The design is great, but I assumed it was one of those - enter code... sorry, you-are-not-a-winner-type giveaways. Or worse yet, Congratulations! You win a 1989-Mike-Harkey-Rookie-Card-type giveaways. In a way, I guess the latter is true, but I didn't know that EVERY card gets a card. Thank you blog-people.

I pulled six of the little buggers out of my stack of cards, and went to work typing codes. After some of the difficulties I had heard about, I was expecting a slow process. It actually went quite quickly for me; a remarkably pleasurable experience.

Here is what I got: 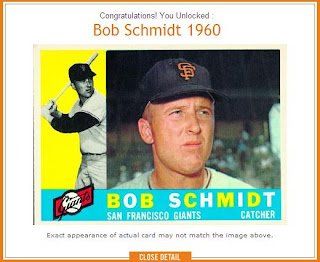 Nice! A card older than me! An All-Star his rookie season in '58, Bob smacked 14 homers. Unfortunately, he only hit double digits once more in his career (10 in '62 for the Senators.) 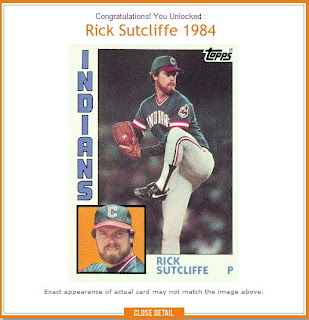 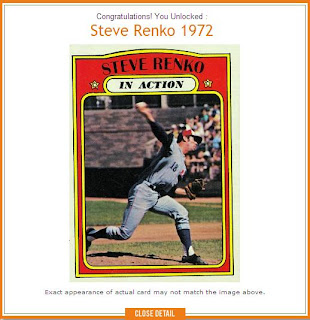 In Action and Montreal Expos... That is awesomeness right there! Another card older than me and my first non-Padres 1972 card. For that, I will always love you, Steve Renko. (According to Baseball Reference, Steve was a very similar hitter to Catfish Hunter. According to my dad, I was almost named Catfish. It was a close second to Travis, and was followed by an equally awesome Spike.) 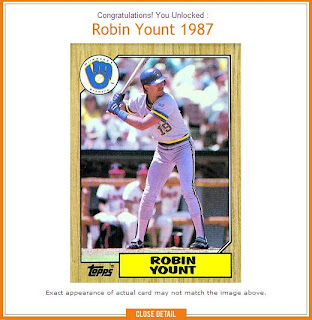 My first Hall-of-Famer!!! Too bad I have a dozen of the same card already. Welcome to the junk-wax era. 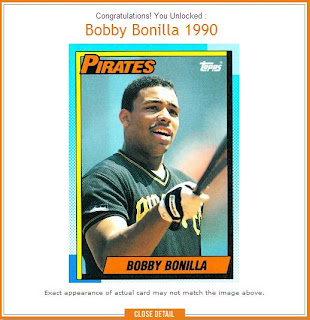 Diving head first into the junk-wax pool... Bobby looks as if he is saying, "You know you aren't gonna spend the money to have me shipped. Why'd you wake me up?" 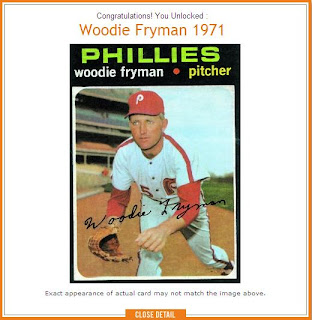 The Card Blog League is GO...

For those of you that played last year, you should have received an email notification from the fine folks at Yahoo! Fantasy Basebal '10.

Our draft is tentatively scheduled for March 14th at 5:45 pm PDT (8:45 for you easterners, F if I know for the middle o' the country folks.

I will start adding new teams if you haven't signed up by the 7th of March...

(FYI: I just sent out my first psuedo-Bipping. It will arrive on Tuesday in the Roberto Clemente - Benito Santiago circa '91- Dale Murphy Zip Code...)

Who am I Bipping??? The first person (other than the Bipee) to answer correctly in the comments will receive a special non-Bip award in the mail!!!

(Yes, I know I still owe Mark his Richie Allen and Matt Ginter cards from my last contest - in July of last year! Mark Aubrey, if you are still reading my blog... I may have lost those cards... I suck, I know. I will, hopefully, be sending a suitable replacement soon...)
Posted by PunkRockPaint at 2:22 PM 10 comments:

The Card Blog League will be starting season number two soon. This season is for keeps! (I didn't win last year. Hence the THIS season.) Those of you that played last year will have first shot at a team. With the likelyhood of owners from last year dropping out, there may be a couple of spots open for new owners.

Pending a league vote, the rules and format will remain the same. Head to head seemed to bring out some tremendous rivalries. (I hear that Dave from Tribecards has a dart board with a photo of Matt from Heartbreaking Cards on it. Word around the campfire: Dayf from Cardboard Junkie refuses to read PunkRockPaint, and only looks at the pictures.)

Please post your intentions in the comments if you plan on renewing your league membership. Hopeful newcomers are welcome to plead their cases as well.


No pictures in this post, so somebody let Dayf know.
Posted by PunkRockPaint at 3:00 PM 11 comments:

Labels: Fantasy Baseball, Recycling to save the planet

I have some packages to send out this week... 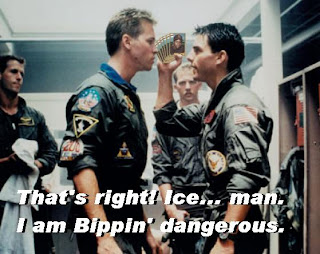