Last week, Rod Richards of Padrographs fame made a trip to San Diego from his home in Portland. We had met once before, when I was a roadie for a couple of my musician friends on a West Coast tour in 2010. He came to a show in Portland, hung out for a few hours talking Padres, and exchanged some baseball memorabilia.

He drove down to San Diego with a couple of friends that were going to a conference in town. Rod had let me know far enough in advance, so I was able to clear my busy blogging schedule. We planned to catch a Padres game and maybe head out to a couple local card shops for some Bip hunting.

If you are familiar with Rod or Padrographs, you probably know that he is the foremost collector of Bip Roberts baseball cards. His collection of Bips is legendary. You can see it here.

Rod and I did manage to get to a Padres game at Petco Park. Turns out it was a tribute to the 1998 Padres that night. Rod was able to get Donnie Wall's autograph. Normally, getting Donnie Wall's autograph wouldn't be worthy of a mention, but since Wall was one of only a handful of Padres autos he didn't have on a Padres card (re: the purpose of Padrographs,) it was pretty monumental.

I got to spend a great couple of days with Rod. He brought me a dozen bottles of Portland craft beers. I'm working my way through those at a pretty good rate. The beers were more than enough of a gift, but he didn't stop there...

Rod gave me the greatest baseball card gift that I have ever received: 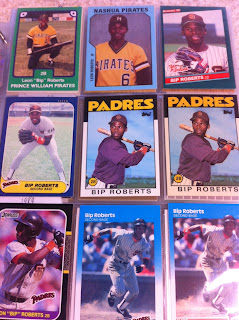 I was able to fill in a couple of holes in the collection (with cards I had meant to send to Rod months ago,) but there are a still some gaps. I call these gaps THE TERRIBLE TEN...

#10- 1990 Coca-Cola Padres #10 (Part of 8-card panel given out to Jr. Padres Club members)
Every member of the Junior Padres Club got one of these, so I figure I should be able to find one here in San Diego.

#8- 1998 Pacific Paramount Platinum Blue #50 (Insert - 1:73 packs)
This one seems like it will be fairly easy to obtain. There are a lot of these floating around. I expect to see one of these on eBay or COMC sooner rather than later. They are more common than the Holographic Silver one already in the collection.

#7- 1998 Leaf Fractal Matrix Z2 Axis #119 (#d /20)
The only reason this one is further down the list than some of the less rare cards is the fact that this set was confusing as heck. I figure I may stumble across it. Maybe.

#6- 1989 Coca-Cola Padres #10 (Distributed to Jr. Padres Club members at a specific game)
Unlike the 1990 version, this card wasn't distributed as part of a sheet to every member of the Junior Padres Club. Kids had to attend a specific, designated game to obtain this card. Still, in San Diego it shouldn't be impossible.

and then it gets tough... 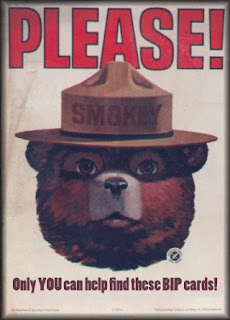 #4- 1998 Pacific Online Winners #283 (In concept, this could be won by inserting a code off of a gold card - 1 per pack - on the interwebs.)
I found an unopened box of these cards at a toy store that was going out of business at an outlet mall. Absolute crap. I almost hope these don't exist. There is no mention of them in the 2011 Standard Catalog of Baseball Cards. If Bob Lemke doesn't know about it, I'm assuming it doesn't exist. Rod says it does... Damn. I'll keep looking.

#3- 1991 Coca-Cola Padres #8 (No idea.)
If this was anything like the other Coca-Cola cards, it should be reasonably easy to find in San Diego. Unfortunately, I've never seen singles or full sheets. Oh, it isn't listed in the Standard Catalog either. Yay! Mystery set!

#2- 1998 Fleer Ultra Masterpiece #452 (One of One)
There's a chance this is still sitting in an unopened box somewhere. I actually bought a box in '98 and pulled a Masterpiece of Travis Fryman... My name is Travis, so I'm thinking it isn't an impossible find. The Bip 1-of-1 could have been destroyed by a tornado-earthquake-cyclone-typhoon. Actually, Come to think of it, the chance of me finding this one is the exact same as it having been destroyed in a tornado-earthquake-cyclone-typhoon.

#1 1995 Padres CHP (???)
Few have ever heard of this set. Nobody has ever seen it. I'm assuming it is a cruel joke. If I haven't seen a Tony Gwynn card from the set. I have to assume the set is a figment of Rod Richard's imagination.

If you have seen/heard of/have a clue where I might find ANY of these cards hit me up at travis@punkrockpaint.com. I'll pay cash money, or trade you whatever you might want.

In retrospect, Rod has cursed me with a horrible burden. I understand completely why he would want to get rid of it.
Posted by PunkRockPaint at 9:21 PM 5 comments:

Call the guys at Olan Mills...

The concept was really funny to me: What if Leaf had made their Studio line of cards back in the '80s. There would be a whole bunch of silly backdrops, and a mess of composite "glamour shots." You know the marketing guys over at Donruss/Leaf would have been on the intercom hollering at a secretary, "Get the Olan Mills people on the line! We're gonna try and work a cooperative crossover!" 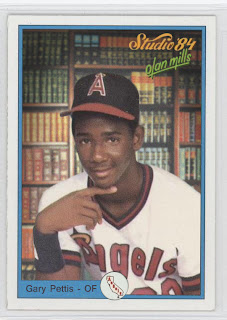 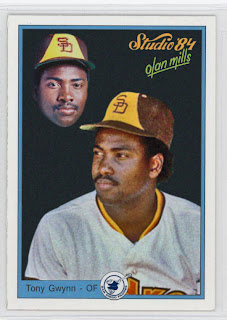 The finished product is less than stellar, but it has been a while.
(Yeah, I know it's Pettis' little brother - and a photo from '85. It was the first classic Olan Mills pose I thought of.)﻿
﻿
Posted by PunkRockPaint at 8:47 PM 24 comments: