Something More Than Perfect...

I posted this in the comments over on Grand Cards. I liked it, so I thought I should share:

I was driving home from work here in San Diego and heard that he had a prefect game through seven. By the time I pulled in my driveway, he was through eight. I ran in to the house and flipped on the MLB Network just as the ninth was starting.


Honestly, I expected to feel bad for him when he would (inevitably) give up a hit. After the amazing catch in left center, I started to believe. No. I started to pray. I am not a Religious (with a capital "R") person. But I was begging a higher power to help him get the perfect game.


As a Padres fan, I have gotten use to a certain level of disappointment. We have come close, but never had a no hitter nor ever had a player hit for the cycle. We have made amazing runs through the playoffs, only to lose in the World Series. But I have never felt like my heart was ripped from my chest.

Jim Joyce did that.


People make mistakes. He admitted that he "kicked the ****" out of that call and cost him the perfect game. It doesn't make me feel any better for Armando Galarraga.

In a strange way, it almost makes the game something more than perfect. I have forgotten about players that have thrown perfect games (I think of roasted chicken berore I think perfect game when I hear the name Kenny Rogers.) 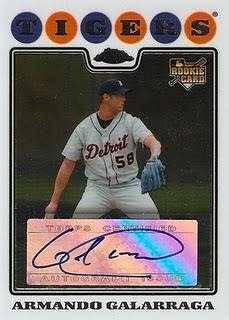 I will never forget Armando Galarraga. He is immortal.
Posted by PunkRockPaint at 9:45 AM