With only 16 days until pitchers and catchers report to spring training, it seems like the perfect time for a little trivia...

1976 was a special year for the United States of America, and a special season for Tony Gwynn. He won the National League MVP award unanimously. Randy Jones won the Cy Young Award for the Padres after winning 22 games. The bicentennial brought a heck of a season to San Diego. I would like to honor one of the Padres greatest seasons with one of the greatest trivia contests of all time! 76 trivia questions in honor of the '76 season. The winner will receive A MAJOR AWARD!!! 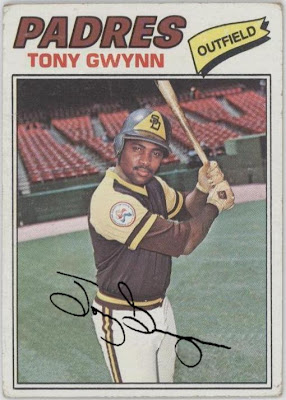 Please submit your answers in the comments section:

1. Since the 1976 season, how many times have players from the same team won both the MVP and Cy Young awards in the same season?

2. How many games did Randy Jones win before the all star break in his Cy Young award winning 1976 season?

6. What player is featured on the "cardtoon" on the back of Tony Gwynn's 1977 baseball card? 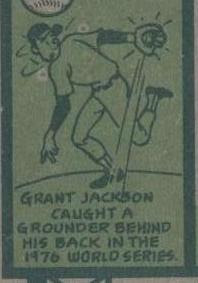 You didn't think that I really had 76 questions?

(Hint: This isn't the "cardtoon" on Tony's card)
Posted by PunkRockPaint at 8:32 PM

1. Unless you count Fingers/Fingers '81 as "players from the same team, fourteen is CORRECT!

3. INCORRECT. Closest without going over wins the showcase. So keep guessing.

4. INCORRECT. Closest without going over wins the showcase. So keep guessing.

Stay tuned for a pic of the back of the card.

These are for my incorrect answers: