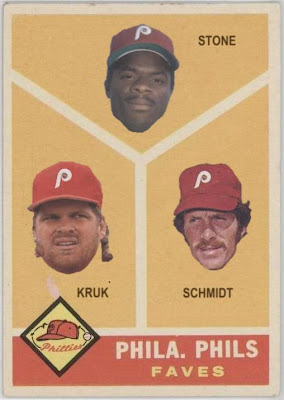 The two on the bottom are no brainers.
Mike Schmidt announced his retirement in San Diego. Word around the campfire is that he was a pretty decent ballplayer.
John Kruk came up with the Padres. He, Marvell Wynne, Sr., and Tony Gwynn hit back-to-back-to-back homeruns to lead off a game in 1987. He is also mentioned in my favorite Steve Poltz song. My favorite memory of John Kruk is at Tony Gwynn's final game in 2001. I was lucky enough to get a pass to the V.I.P. tent for a pre-game party. As I got to the front of the long line for the bar, the guy behind me in line tapped me on the shoulder and told me not to get ALL the beer. That guy... was my friend Jeff. As we left the bar, Jeff backed into John Kruk, spilling Krukie's over-filled buffet plate onto the floor. Sweet.
Back in 1985, my friends and I made up a great baseball game using baseball cards and a 20-sided die (um... We stole the die from some nerds we had beat up earlier.) While my less card-centric friends used any-old cards they had, I culled my team from my stack of shiny new 1985 Topps cards. The only team I had that was close to complete was the Phillies. Unfortunately, I was short an outfielder. I was able to trade a couple of doubles for my buddy's Jeff Stone card.
Despite lagging far behind Juan Samuel in real-life stolen bases and Mike Schmidt in real-life home runs, Stone led my team in every offensive category for our 20 game season. He will always be one of my favorite Phillies.
Posted by PunkRockPaint at 10:35 AM

awesome how you kept the kruk mullet in the picture.