Jumping on the Bandwagon...

I know a good idea when I see it. Night Owl, followed by I Heart Halos, started some great lists. I LOVE making lists!!! Especially "to-do" lists... and not following through.
I have decided to create a list of my three favorite players for each Major League Baseball Franchise.
I will try to complete the list by opening day...
Up first MY San Diego Padres: 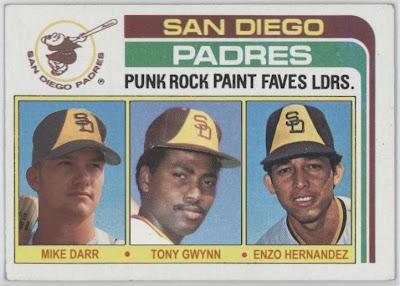 Tony is the obvious choice. One of these days, I will post the crown jewels of my Tony Gwynn collection. (I will put it on my list of things to do...)
Mike Darr was one of my favorite young Padres at the turn of the century. He had a ton of potential, and was a genuinely nice guy. Sadly, on the eve of Spring Training 2002, Mike and a friend were killed when he was driving drunk and crashed his car in Peoria, AZ.
To me, Enzo Octavio Hernandez (Martinez) epitomizes the Padres' futility in the first dozen or so years after expansion. In 1971, he was the Anti-Triple Crown winner, finishing last (of batting qualifiers) in the three Triple Crown statistics, with a .222 BA, 0 HR, and 12 RBI.
Leading off for your San Diego Padres, shortstop, number eleven, Ennnnnnnnnzo Herrrrrrnannnnnndez!!! (It gives me chills.)
Posted by PunkRockPaint at 9:43 AM

Can't wait for the rest.

I LOVE that you can actually make a card with all the player images on it. You are a master.