I know I will never have the largest collection of cards from Topps Million Card Giveaway... but I can definitely have the coolest! 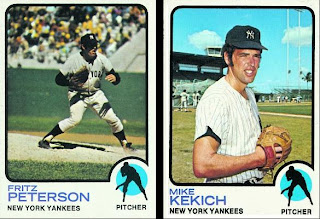 For those of you unfamiliar with the story, I swapped errr, swiped this from Wikipedia:
The affair began in 1972, when the two couples joked on a double date about wife swapping, a phenomenon that caught on in some uninhibited circles during the early 1970s. According to one report, the first swap took place that summer, after a party at the home of New York sportswriter Maury Allen. The couples made the changes official in October; Kekich moving in with Marilyn Peterson and Peterson with Susanne Kekich, but no word leaked out until spring of 1973. A light moment came when New York Yankees General Manager Lee MacPhail remarked, "We may have to call off Family Day." The trade worked out better for Peterson than it did for Kekich, as Peterson is still married to the former Susanne Kekich, with whom he has had four children. Kekich and Marilyn Peterson did not last long.
I also added this little gem: 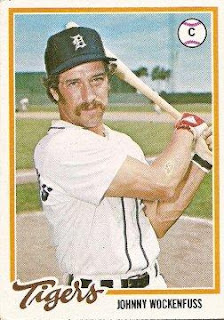 Such a cool card! I can't believe I made this trade by mistake... I thought I was getting a 1978 Snuffleupagus... 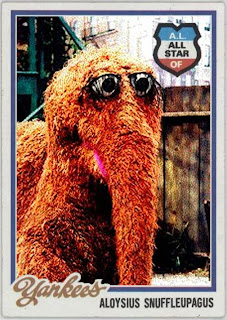 Damn. I had no idea his first name was Aloysius! (and I always pictured him on the Mets...)
Posted by PunkRockPaint at 2:41 PM

Bummer there with the Snuffleeupagus confusion.

It's scary that I have been trying to trade for the Peterson/Kekich cards and have been turned down twice for a Wockenfuss. I have managed to finish my Rusty Kuntz collection though. You gotta believe 'Ol Johnny was tormented as a kid with the chant of Johnny Fuckinwuss. Or at least that's what I would have tormented him with.

I want that Snuffy card.

That wife swapping story has always creeped me out. Question: How did I manage to get a card for Johnny Damon with a number in the 400's with a pack of Series 1 cards? This is from Topps 2010. I am sure that they have started to print Series II, but how did a single card get into my kid's pack? Heard of anything like this? I am not sure who else to ask.

Cracking up big time! Love it!