This Date in History...

On December 10, 1948, the United Nations adopted the Universal Declaration of Human Rights at the Palais de Chaillot in Paris. What some have called the "Modern-Day Magna Carta," the declaration outlines the human rights standards the UN believes should be enforced by all nations—among them "the right to life, liberty and nationality, to freedom of thought, conscience and religion, to work, to be educated, [and] to take part in government."
That day in 1948 could arguably be called the birth of the modern human rights movement. With widely agreed-upon universal standards in place, "atrocities" could be more concretely labeled "violations" and could be more readily acted against. States that have embraced these standards have, since 1948, observed December 10 as Human Rights Day. 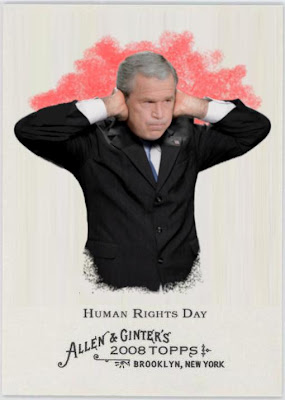 I stole the text from Wikipedia on this post... Lazy? Yes. Sorry, no quality time for posting today.
Posted by PunkRockPaint at 9:51 AM