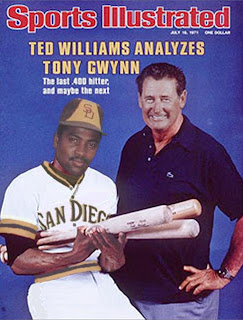 Tony Gwynn continued his hot hitting into the 1974 season. After an .875 September, Tony led all major leaguers with a .454 batting average through June. You have probably seen the Sports Illustrated cover story from July of '74. Unfortunately, we had to wait until 1979 for Tony to hit .400 for an entire season.

Tony ended the '74 season on the disabled list. A "wild pitch" by the Cy Young award winner, Mike Marshall, of the Los Angeles Dodgers hit Tony in the left eye... WHILE TONY WAS IN THE ON DECK CIRCLE!!!

To this day, Marshall claims that the "pitch just got away" from him. Tony was 3 for 4 with three home runs and eight RBI against Marshall on the season.

To this day, Padres fans will squint their left eye and spit on the ground every time the name Mike Marshall is mentioned. 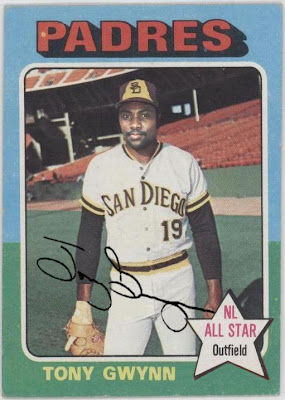 Posted by PunkRockPaint at 1:33 PM

Ah, Tony had it coming. He was trying to steal Steve Yeager's signs.