The 1973 card holds a special place in my heart. I was born in '73, and this card was given to me as my first Christmas gift. It was taped to the headboard of my crib, so the back of the card is damaged beyond repair. Nonetheless, it is my favorite card in my entire collection.

The 1972 season represented on this card, was one of Tony's finest years in the power department. Tony belted a career best 32 home runs. The power outburst, along with his 130 RBI and .316 batting average, brought him his first National League MVP award. Tony edged Johnny Bench in the voting largely due to his speed on the base paths. For the second year in a row, Gwynn finished only two stolen bases behind Lou Brock for the league lead (63). 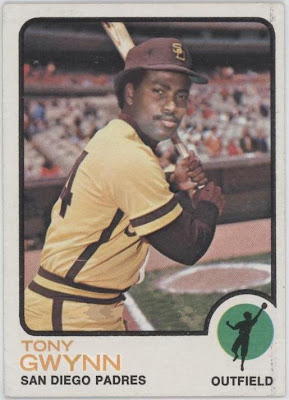 I find it somewhat spooky how much his face looks the same in this shot as it does in the card from the previous year. The two photos show the same steady glare; same focus and intensity; same shadows. If it were not for his hair, you could certainly claim that these were the same doctored photo. Since Photoshop wasn't around back then (and Topps' art department wielded a heavy airbrush back in the '70s) you have to assume it is just an eerie coincidence.

Posted by PunkRockPaint at 11:06 AM

I remember the '73 card it came out in my Sophmore year of high school the same year my friend Jill Roberts brother Dave got drafted by the Padres.